Why democracy demands a People’s Vote

Let the people choose. This is the heart of the People's Vote campaign, which is hosting a variety of events during a summer of action right around the country in order to galvanise support for a referendum on the final Brexit deal reached with Brussels. With over 270,000 signatures for its petition at the time of writing, the non-partisan group is growing in political clout, popular sympathy, and business support. Perhaps the most significant success of the campaign has been contributing to a major shift in public opinion, which now is twice as favourable of a People's Vote as it is unfavourable (see graph below). But why, you may ask, should you support a People's Vote and sign the petition, anyway? I can think of three compelling reasons. A People's Vote is 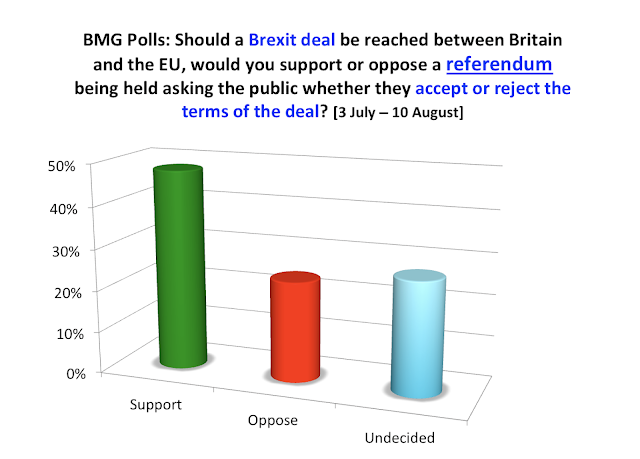 Firstly, a People's Vote is essential for democracy: it would be plain common sense and in keeping with our democratic constitution. Democracy demands a People’s Vote. In 2016, a very different referendum was held, when voters were asked to choose between the ‘known’ of Remain and the ‘unknown’ of Leave. While we knew what remaining looked like, we had no clue what leaving would look like. But a People’s Vote would be a choice between the 'known' of Remain, the 'known' of the Government's proposed deal and the 'known' of no deal. We will know what Brexit really means. So we will be in a position to make an informed choice. And this time we would have three options - 'deal Brexit', 'no-deal Brexit' and 'Remain' (which we simply rank according to our personal preferences). So if you value informed, democratic decision-making, you should support a People's Vote.

The Government did not have a plan for Brexit in 2016. But now a plan is beginning to emerge. Since 1997, major constitutional changes have almost always needed the public's verdict - from the Belfast Agreement to the AV referendum. Brexit is, by far, the biggest constitutional change of modern times. Our constitution demands a People's Vote. Relying on the 2016 vote is like asking people to vote on the Belfast Agreement before it was even drafted! The constitutional experts of UCL's Independent Commission on Referendums agree: clear options are vital to holding fair, democratic referendums. As the Commission argues, 'a referendum should come at the end, not the beginning, of the decision-making process' - and so should a People's Vote be held after a deal is negotiated. Only now, and not in 2016, do we see those options emerge, from deal and no deal to remaining in the EU.

Secondly, a People's Vote is essential for unity of the United Kingdom. Without a referendum, no outcome would have legitimacy, as it would be tantamount to rule from Westminster without any public say. The current deal is a million miles away from the future painted by Brexiteers in the first referendum campaign, and is supported by only 11% of British people (YouGov, 7 August)! Now people have a better idea of what Leave encompasses, a People's Vote would be demonstrably fair, whatever that outcome. We will unite our disunited kingdom.


If you agree that a People's Vote is essential - for democracy, unity, and Remainers and Leavers alike - then please sign the petition. And if you want to have a real impact, then follow the South West Herts campaign for a People's Vote on Twitter and Facebook, and consider writing to your MP. Because I do not demand a People's Vote. Democracy does.
Posted by Edmund Wilson at 04:32

Email ThisBlogThis!Share to TwitterShare to FacebookShare to Pinterest
Labels: Politics